Castrovel is a terrestrial planet in the Pact Worlds system and homeworld to lashuntas, elves, and formians.[1]

Castrovel is a warm, verdant world with intense storms, powerful tides, and sprawling jungles and swamplands in which a tremendous variety of life roams freely. The wilderness is kept wild, and the planet's resources harvested sustainably, due to a lashunta desire to allow the same evolutionary processes that created them to develop and improve other life on the planet.[1]

The lashunta-dominated continent of Asana is north of the formian continent known as the Colonies.[2]

Castrovel's rocky moon is named Elindrae. It has no atmosphere, but it hosts most of Castrovel's shipyards and heavy industries, where the pollution can have no effect on Castrovel's ecological balance.[1]

Castrovel has hosted civilization long before the Gap. Its lashuntas formed rival city-states, the formians built massive continent-spanning hives known as the Colonies, and the elves kept to their nation of Sovyrian. The world also has numerous ancient magical portals called aiudara that have linked Castrovel to other parts of the Pact Worlds system for thousands of years.[1]

Lashuntas and formians warred for thousand of years, until finally striking a shirren-brokered peace deal in 287 AG.[1][3]

Lashunta city-states were traditionally independent, with most governed by democratic matriarchies and engaged in rivalries — and sometimes armed conflict. Today, corporations have a larger say in matters; there is less direct conflict, many governing bodies have financially influenced officials, and some settlements are directly owned and operated by corporate interests.[1]

One exception, however, is Qabarat, the planet's largest spaceport. Its leader Lady Morana Kesh keeps the Shining Jewel of the Western Sea independent, and the city-state is well known not only for being the planet's entry point for interplanetary travelers but also for its renowned academic institutions, beautiful architecture, and role as a hub to other city-states.[1]

Formians are an insectile hive race that dominate the southern continent of the Colonies. They pledge allegiance to the Overqueen, which is a philosophical entity formed during their Meeting of Queens rather than a living person. Formians live in tunnel-ridden hive-burrows that can stretch for miles across.[1]

While lashuntas and formians have made peace, interact with each other, and participate in the Pact Worlds' broader culture, Castrovel's elves stay bound to their ancient continent-spanning nation of Sovyrian. They are isolationists and traditionalists, engage in little unnecessary trade, and ban outsiders from their capital of El.[1] 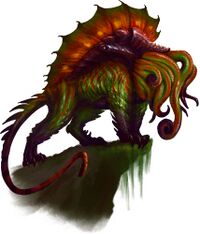 A ksarik, a living and mobile plant creature native to Castrovel.