The Starfinder Society is an organization based on Absalom Station that is attempting to decipher the cause of the Gap and the fate of the forgotten planet Golarion. Its members are known as Starfinders,[1][2] who are known throughout the galaxy as exceptional explorers.[3]

The Starfinder Society was founded shortly after the end of the Gap, and drew its inspiration from the incomplete tales of the Pathfinder Society, a similar pre-Gap organization. Its first mission was to map out the edges of the Gap in order to discover how the event happened and what occurred during its uncounted years. Secondarily, the Society focused on discovering the fate and possible location of the lost cradle of humanity in the Pact Worlds system, the planet Golarion. In the years since its founding, the Starfinder Society's mission has shifted from investigating the Gap to exploring the galaxy now opened for exploration by the Drift beacons.[1]

The Society decided over a century ago to prohibit exploration of a region of space known as the Scoured Stars both because of its obvious dangers and because the few missions that had scouted the systems in the region yielded little to no useful discoveries. This changed when First Seeker Jadnura spearheaded a massive expedition into the region to explore its connection to a magical artifact known as the Tear. The Starfinder Society lost all contact with the expedition, which was composed of nearly 80% of its assets and agents, and found that all travel into and out of the region was being blocked by a massive shield of aurum energy later dubbed the Godshield. The loss of that many agents devastated the Society, and only the dedicated work of a group of senion Starfinders led by Luwazi Elsebo managed to keep the organization from falling apart. They rebuilt the Forum (see below) and the members around Elsebo become the new leaders of the various factions within the Society both old and new.[1]

The Society soon received another blow when a number of veteran agents quit, discouraged by the organization's massive losses. This left the few remaining Starfinders no longer able to keep ahold of their various far-flung claimed planetoids, stellar regions, and other archaeological sites. Elsebo covered for the losses by hiring reputable mercenaries for long enough for a new group of Starfinders to complete their training. The Society is now intensely focused on discovering the truth behind what they have dubbed the Scoured Stars incident.[1]

Most Starfinders are based in Starfinder lodges that are scattered throughout the galaxy. Each lodge is headed by a venture-captain who manages the field agents under her purview and runs day-to-day operations.[1]

The center of the Starfinder Society is the Lorespire Complex, located on Absalom Station, and is easily accessible from distant parts of the galaxy via the Drift. It is a collection of structures built around the Lorespire, and includes the Archives, the Hall of Discovery, and other locations integral to the Society's continued functioning.[1]

The First Seeker is elected by her peers based on merit, her adventuring experience, and her field of interest. The First Seeker is given the task of setting the Society's primary research goals, and often uses this ability to pursue her own specific interests. Once her term has ended, a person can never again be chosen for the position.[1]

The Forum is an elected body of Starfinders who assist in coordinating the Society's countless far-flung operations while supporting the primary research goals of the current First Seeker. Any Starfinder can be elected to the Forum, and most members continue pursuing their own interests in parallel to their duties as Forum members. Many Forum members are Faction leaders or venture-captains, while others hold no other titles.[1]

Members of the Forum following the Scoured Stars Incident include:

Besides the First Seeker and the Forum, Guidance is the third pillar of Starfinder Society leadership. Guidance is a network of the uploaded personalities of exemplary Starfinders, including the majority of First Seekers. Only rarely, when a person is deemed unworthy or dies before the uploading process, does a First Seeker's persona not become a part of the Society's spiritual anchor. Guidance inducts all new Starfinders into the organization and gives them their commencement address. It also helps in the process of selecting a new First Seeker by confirming all new appointments. Guidance largely agrees with the votes of the majority of Starfinders, although there have been a few occasions when it has not.[1]

There are been factions within the Starfinder Society since it first began. Each of the factions supports its members, but knows that each person's first allegiance is to the Society. Even though the various factions have different goals and philosophies, most actively cooperate with one another.[12]

Leader: Radaszam
Motto: Fame, glory, and money. We want it all.

After the Society lost most of its resources during the Scoured Stars incident, it began hiring mercenaries to handle some of the duties formerly performed by Starfinders. Many of these freelancers decided to stick around after their duties were completed, becoming the first members of the Acquisitives faction.[12]

The Dataphiles are a faction obsessed with the collection of all forms of knowledge, secrets, data, and information. They are particularly interested in discovering during the Scoured Stars incident.[12]

Leader: Zigvigix
Motto: The sword that seeks the darkness.

The Exo-Guardians are sworn to protect the Pact Worlds from external threats. They use the Starfinder Society's missions to distant worlds to scout for any perils on the horizon.[12]

The Second Seekers attempt to follow the Starfinder Society's First Seeker orders and guidance to the best of their ability, and support her overarching goals for the organization. As the current First Seeker, Luwazi Elsebo, is trying to discover what happened to her predecessor, they are currently focused on that.[12]

Among the factions of the Starfinder Society, the Wayfinders specialize in the exploration of new parts of the galaxy now accessible via the Drift. They always seek to be the first to set foot on a new planet, scan an undiscovered nebula, or make first contact with a new species.[12] 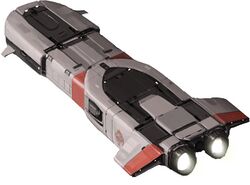 The Society deploys two of its own starship hulls: the Drake and Pegasus. The Drake is a sturdy transport variant suited for combat, while the Pegasus is an explorer variant built for speed, sensors, and flexibility.[13] Also, the Exo-Guardians use another hull: the Gorgon, a dertroyer variant that sacrifices sensors and mobility for solid firepower.[14]